The “bigger picture” image below, taken from the LPC 2020 talk, shows the overall KernelCI architecture from a user point of view: 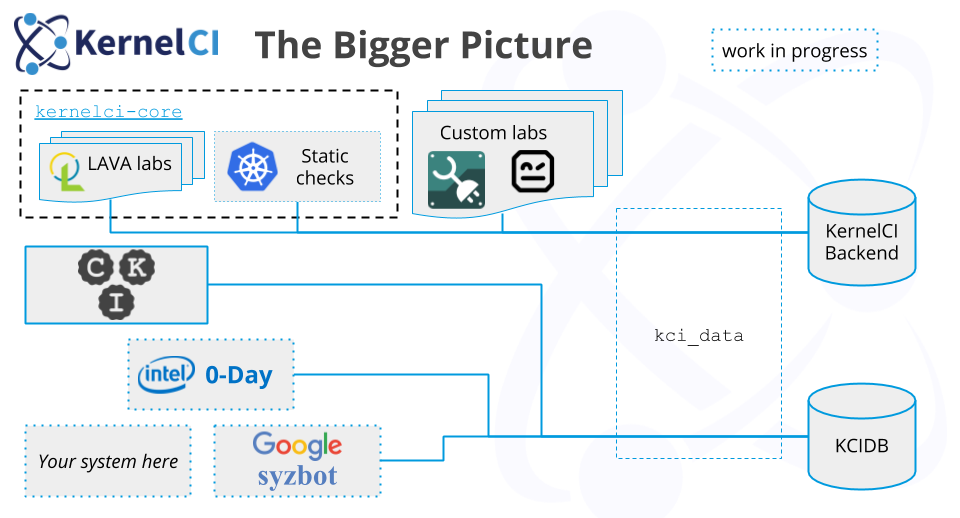 The first thing worth noting is that there are two main categories of tests: the “native” ones are orchestrated by KernelCI itself and stored in the KernelCI backend while others are imported into KCIDB from other autonomous systems.

There are several instances hosted by the KernelCI project, for different needs as explained in the documentation. Each instance is made up of all the components listed above. It’s possible for anyone to set up their own private instance too. However, developers typically don’t need to set up a full instance but only the components they need to make changes to. Here’s how they all relate to each other:

Dotted lines are optional dependencies, and solid lines are required ones. To put this in words:

The Core tools can be used on their own on the command line without anything else installed. They may be used to build kernels locally, submit data to a Backend API, or schedule jobs in test labs such as LAVA. Jobs may be run without any Backend API, but if there is one then results can be sent to it. Then Jenkins uses Core tools to do all that, via Kubernetes for kernel builds. Finally, the Web frontend uses a Backend API but nothing depends on it (apart from end users) so it’s entirely optional.

Other fully autonomous systems producing their own kernel builds and running their own tests can submit results to KCIDB, which is a BigQuery database to provide a unified kernel test reporting mechanism. Please take a look at this blog post for a comprehensive description: Introducing Common Reporting.